THE Holy Angels Day Care Centre was established in 1978 in the basement of Carlow’s old district hospital.
A retired nun named Sr Columba Flavin, a member of the Presentation Order, saw that there was need for a day care service for children with special needs and went about setting it up. With a cheque for £100 from the South Eastern Health Board (SEHB) and the names of five children with special needs in the local area, Holy Angels came into being. 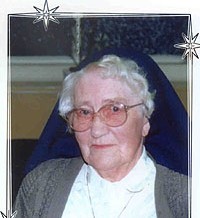 At the time two local nurses – Doris Doyle and Maude Lacey – gave their time free for six months and thereafter the nurses were paid a very small wage. Sr Columba herself worked on a voluntary basis and continued to do so until her retirement in 1991. Shortly after setting up the centre a group of local people came together to form the Carlow Question Time Committee and set about raising much needed funds to develop the centre. Their first purchase was a small minibus to bring the children to and from the centre. Again the position of driver for this minibus was a voluntary one and remained this way until 1992 when the centre was in a position to employ a driver and expand the bus service to give children outside the town area a service. In 1983 the present centre at Strawhall was purchased at a price of £52,000. Half of this sum was raised by the Holy Angels with the help of Carlow Question Time Committee and the other half by the South
Eastern Health Board. The centre was formerly a knitwear factory and several renovations had to be carried out. In April 1984 the late Dr Patrick Lennon, Bishop of Kildare & Leighlin, officially opened the centre.
When Holy Angels started back in 1979 it was set up to provide a day care service for children with special needs of pre-school age. It was then expected that the children would progress on to either St. Lazerian’s special school, which caters for children with mild and moderate learning delay or else on to a mainstream school. This proved to be the case for most children but unfortunately all children with special needs do not fall into the mild or moderate range of learning delay, therefore it was extremely difficult to find suitable placements for the children of schoolgoing age (5 years +) who fall into the severe to profound range of intellectual disability.It was agreed that these children could remain on at the centre but we felt that what we had to offer was not enough. So, we decided to apply to the Dep. of Education and Science for a teacher to set up a special class for this group. In January 1998 a teacher and childcare assistant were appointed by the Department of Education and in April 1999 a second teacher and second childcare assistant was appointed. At the end of 2002 St. Lazerian’s School were in a position to accommodate the severe and profound group and because of the demand for pre-school places this group re-located to St. Lazerian’s School.

The centre now exists as a designated, specialised pre-school for children(aged 18 months to 6 years) with special needs and caters for children with range of disabilities.